Bulgarian PM Borisov: We will Keep Safe the Airspace of Northern Macedonia with New Fighter Jets 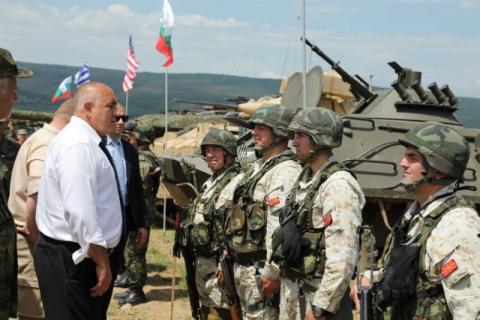 Prime Minister Boyko Borisov watches the tactical classes "Strike Back 2019" on the Novo Selo with the Minister of Defense Krasimir Karakachanov and the General of Defense General Andrei Bocev.

"Everyone comes to teachings in Bulgaria. We have a reliable technique that we are modernizing and completing what has been destroyed over the years. The base in Novo Selo is a wonderful facility, "said Borisov.

"The teachings here last throughout the summer, and in recent years, as many as have been allocated for defense than they have been predicted for years," the prime minister told reporters.

He also announced that Zoran Zaev had agreed, when Bulgaria acquired the new aircraft, to protect the airspace of Northern Macedonia.

Borisov stressed that "Strike Back 2019" was run only by Bulgarian officers and greeted the soldiers for the good doctrine. "To train together, to make good friendship. Always be ready for "Strike Back".

The troops from the Multinational Battalion team demonstrated the accomplishment of tasks in joint defense and counter-actions. The Prime Minister congratulated the participants in today's operations. On his part, Defense Minister Krassimir Karakachanov thanked Prime Minister Boyko Borisov for his support.

"Every year we have provided funds for modernization and what we have set with the Minister of Defense - we continue to implement them," said defense chief General Andrei Botev.

More than 800 soldiers from the armed forces of Bulgaria, Albania, Greece, Northern Macedonia and the United States joined this year's tactical training with a combat shootout.

The Army Servicemen of Bulgaria were more than 600 of the 38th Mechanized Battalion and 20th Self-Defense Artillery Division of the 2nd...