Judiciary in turmoil due to handling of Novartis probe 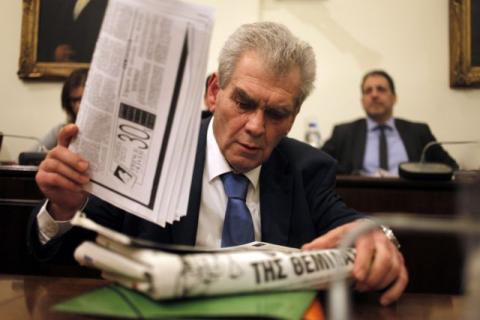 Straight on the heels of Justice Minister Michalis Kalogirou's order yesterday that a disciplinary probe be launched against him, former Deputy Supreme Court Prosecutor Ioannis Angelis (who was supervisor of the corruption prosecutors handling the Novartis probe) has sent an open letter to the press outlining a long string of procedural violations and allegations that there were targeted prosecutions without the necessary evidence in the Novartis case.

Kalogirou in a subsequent statement maintained that Angelis had not brought his allegations to his attention.

Following the general probe of the handling of the Novartis case at all levels of the process ordered by Supreme Court Prosecutor Xeni Dimitriou, Kalogirou ordered the legally mandated disciplinary probe of Angelis, who has charged that a government minister - whom Angelis has described as Rasputin - had ordered judicial functionaries to file charges against individuals without the requisite evidence.

Angelis resigned his post in January and at the time unleashed allegations that Corruption Prosecutor Eleni Touloupaki had exceeded her remit in taking depositions in the case.

It should be noted that Alternate Justice Minister Dimitris Papangelopoulos in February, 2018, had told Parliament that the Novartis affair is "the biggest scandal since the founding of the Modern Greek state" [in 1830], even though the minister is not supposed to be privy to the court files.

The ten ex-ministers and two former Prime Mnisters - ND's Antonis Samaras and caretaker PM Panagiotis Pikrammenos - who were investigated by the judiciary have charged that they were the victims of a government-judiciary...