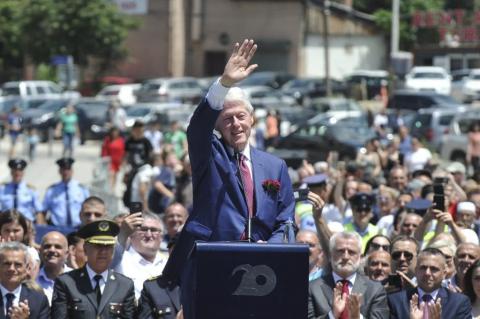 Crowds of people gathered in central Pristina on Wednesday to celebrate the anniversary of the end of the war 20 years ago and applaud former US President Bill Clinton and his Secretary of State Madeleine Albright, who were key advocates of NATO's military intervention.

"It is my biggest honour to have stood with you against the ethnic cleansing and for freedom," Clinton told the crowd in Mother Teresa Square, some of whom waved American flags.

"Never forget, when you think of the challenges ahead of you, and I say that to your existing leaders, you have already done something amazing. You have given a whole generation the first 20 years of their life in peace," Clinton also said in his speech.

The former commander of NATO troops in Europe, Wesley Clark, who led the Western military alliance's 78 days of air strikes against Yugoslavia, which forced President Slobodan Milosevic to withdraw his forces from Kosovo, also attended the celebration.

NATO's troops entered Kosovo on June 12, 1999 after its campaign of air strikes ended.

"June 12 is the date that unites us all, it's the founding of our identity as citizens, as a nation, as Kosovo. This work [the NATO intervention], we will never forget and will always respect," said Kosovo's President Hashim Thaci.

Clinton was awarded Kosovo's Order of Freedom by Thaci on Tuesday for his role in ordering the NATO bombing.

A statue of Albright was set to be inaugurated on Wednesday afternoon in Pristina, which already has a statue of Clinton in the city centre.

NATO launched its bombing campaign in 1999 to end Milosevic's forces' campaign of repression and ethnic cleansing against Kosovo Albanians.