In Moldovan Crisis, an Opportunity for EU to Act 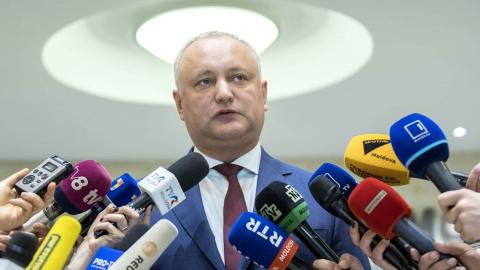 The diagnosis is correct. In fact, this is what a European Parliament resolution adopted in November 2018 also called Moldova.

The parties making up the new governing majority essentially vowed to put an end to this. It was this - not some great game between the EU and Russia - that defined politics for most Moldovans in recent years.

The oligarch that the parliament's declaration was aimed at was Vlad Plahotniuc.

His Democratic Party, PDM, took complete control of the government following the Moldovan political crisis of 2015, which was triggered by a massive bank fraud.

The PDM, which is thought by many to have benefited from lawlessness in Moldovan politics probably more than any other party, wrestled its way to a majority in the parliament and ruthlessly captured the institutions of state.

The parliamentary election in February 2019, however, produced a hung parliament. The PDM, even with Plahotniuc's influence on the media and local authorities, finished only second with the PSRM coming first and the ACUM block third.

It was expected that the PDM and the PSRM, complicit in plundering Moldova while maintaining the semblance of a heated geopolitical divide, would formalize their unspoken coalition. For reasons unclear, but after heavy persuasion from Brussels, Washington and Moscow, Dodon went with ACUM instead, one day before the deadline to form a new government expired.

And then Plahotniuc struck back. The Constitutional Court, packed with PDM appointees, announced that the deadline to form a government had, in fact, expired the day before Sandu...