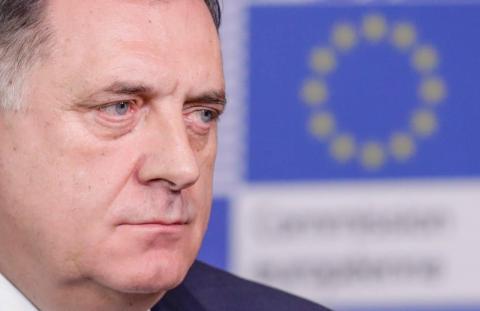 Bosnian Serb leader Milorad Dodik, who now chairs Bosnia's tripartite state presidency, has refused to meet Christiane Hohmann, the outgoing German ambassador to Bosnia, claiming that she has worked against the interests of the Bosnian Serb community, SRNA news agency reported on Wednesday.

"As the ambassador of Germany in Bosnia for over more than three years, you have worked to the detriment of the Bosnian Serb people and Republika Srpska [Bosnia's Serb-led entity]," Dodik wrote in a letter rejecting Hohmann's offer to meet.

He accused Hohmann of being politically biased, subjective and of diplomatically inappropriate behaviour during her mandate in Bosnia.

The outgoing ambassador, who will leave Bosnia this summer, has not issued any public response to the letter.

Dodik has had tense relations with a number of EU ambassadors who have voiced concern about his separatist agenda and perceived hostility to the Bosnian state.

He reportedly cancelled a meeting in November 2018 with the Austrian ambassador to Bosnia, Martin Pammer, claiming that Pammer had also been biased and had done everything to make cooperation impossible.

"With your biased statements, you have frequently gone beyond the framework of good diplomatic behaviour and, with that, have alienated us [Bosnian Serbs] from cooperation with a country that we highly respect and with which we would like to cooperate," Dodik wrote in that letter, published by SRNA news agency in November 2018.

On December 5, 2018, he also walked out of a presidency meeting with a delegation of the Peace Implementation Council Steering Board because the Republika Srpska flag was not on display, as BIRN reported. The PIC is the international body that oversees the 1995 Dayton settlement...