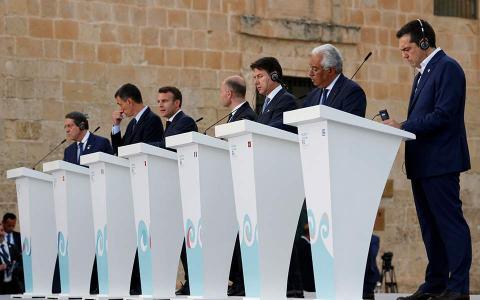 The leaders of France, Italy, Malta, Portugal and Spain on Friday expressed their unreserved support for the Republic of Cyprus' right to drill for gas in its exclusive economic zone and called on Turkey to respect international law and the principles of good neighborly relations.

Meeting in Malta for the 6th South EU Summit, the five leaders, as well as those of Greece and Cyprus, expressed their regret over Turkey's failure to respond to calls from the European Union concerning its continued operations in the eastern Mediterranean and its actions in the Aegean, while adding their concerns about potential efforts to drill within Cyprus' exclusive economic zone.

They called on the European Union to continue working on the issue and to explore the possibility of taking measures against Turkey in the event that Ankara fails to respond to concerns.