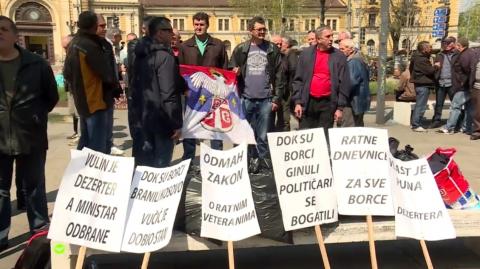 Dejan Ivanovic was wounded while serving in the Kosovo war in spring 1999, when he stood on an anti-personnel mine in Kosare and lost one of his legs.

For the last 20 years, he has been a military invalid, but has had to struggle with bureaucracy to get the benefits that he is guaranteed by law.

Serbian legislation offers a series of rights to people like Ivanovic: military invalids have the right to prosthetic limbs, monthly compensation and a motor vehicle, among other things.

"I have right to a change of prosthesis. The procedure is that I go to the [municipal] service for veterans to say what I need, and they send me to a commission that should establish whether a change is necessary. Then they issue a decision about what rights I have, then they send that to the Ministry [of Labour, Employment, Veterans' Affairs and Social Affairs], and then I get my decision, and then I can go to a clinic to order the prosthesis," Ivanovic said.

He explained that the entire procedure takes him two months.

Ivanovic is a member of an NGO called Peace Builders from the city of Krusevac, one of the organisations that participated in the recent public debate about a new draft law that will regulate the rights of wartime soldiers, military and civilian war invalids and their families.

The public debate period finished at the beginning of June, and the Minister for Labour, Employment, Veterans' Affairs and Social Affairs, Zoran Djordjevic, said the draft legislation is expected to be sent to parliament in the autumn.

The draft introduces recognition for veterans of wars in Croatia, Bosnia (until 1992) and Kosovo, but it still misses...