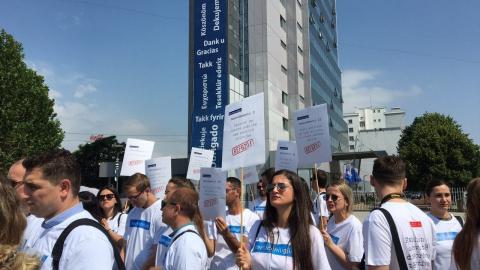 Members of civil society groups in Kosovo accused the security guards of the ruling Democratic Party of Kosovo, PDK, of pushing them away from the party building on Monday as they were protesting in a "March for Refusal", as they called it, over the new bill on financing political parties.

The NGOs protested in front of the HQs of all six political parties, but were pushed away only when they arrived in front of PDK's main offices.

The NGOs promptly organised a press conference at which they called on the PDK to take responsibility for the incident, and accused of using violence.

"Civil society … invites the PDK, as the biggest party in the governing coalition, to assume the responsibility that belongs to it … by respecting the standards of democratic societies and the fundamental rights of civil organization to freedom of expression and peaceful protests. Civil society requires the PDK to take a stand and measures on the violent actions of its staff," Ismet Kryeziu, from the Kosovo Democratic institute, told the press conference.

Representatives of 100 NGOs in Kosovo joined the march on Monday against the Bill on Financing Political Parties, and uged the parties in parliament not to pass it. They consider the bill unconstitutional and against international standards on financing political parties.

In June 2018, the Venice Commission, an advisory body to the Council of Europe, expressed serious concerns about independent audits submitted by political parties in Kosovo.

"The political parties had significant amounts of...