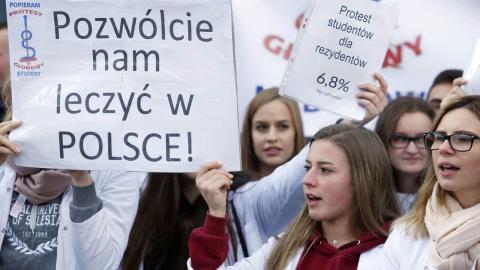 Kamila Jakubiak recalls the phone ringing at 4 a.m. and being summoned to Warsaw to perform emergency surgery.

It was a 100-kilometre drive from Radom in east-central Poland, where Jakubiak splits her residency as a junior doctor, or resident.

"At four in the morning I had to leave my child with someone," she said.

Worse was the actual night-shift in Warsaw, where Jakubiak remembers being left alone as a first-year resident with 40 patients, 30 of them undergoing chemotherapy. "I couldn't sleep the whole night for fear something would go wrong."

Her reward? Between 400 and 500 euros per month, then the average salary for a resident doctor in Poland. "My salary was peanuts," she said. "We survived because my husband has a good salary as a software engineer."

Resident doctors in Poland have long borne the brunt of severe staffing and funding shortfalls in Poland's over-stretched healthcare system.

In 2017, they went on hunger strike demanding change, and thought they had won a historic victory when the government, led by the nationalist Law and Justice party, promised to boost the healthcare budget in early 2018.

Eighteen months on, on June 1 this year, they were out again, this time backed by their more senior colleagues in white medical robes and declaring they had been betrayed.

Carrying banners that read 'We are all patients', the doctors marched through the Polish capital to demand an increase in the healthcare budget to 6.8 per cent of economic output.

They say the neglect of the healthcare system gives the lie to the PiS claim to be the party of social welfare.

"We thought we had managed to change this one and a half years ago, but we were wrong," Jan Czarnecki, the head of the Polish Union of...