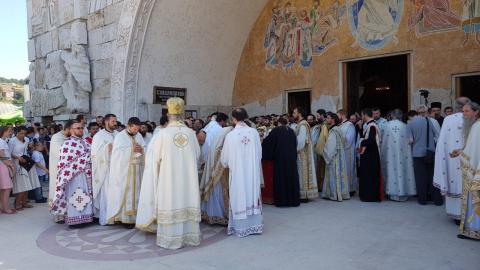 President Milo Djukanovic said on Monday that he will not allow anyone to take away what belongs to Montenegro and warned of what he called "external" interference in the country's affairs.

Djukanovic insisted that the new draft law on freedom of religion was not intended to baselessly take away anyone's property.

"There is no intention from Montenegro to take away a metre of space from anyone, but [the country] also does not intend to let anyone steal what is state property," Djukanovic said at a party meeting of his ruling Democratic Party of Socialists, DPS in the northern town of Berane.

The Montenegro government adopted a religious freedom draft law on May 16 that includes a register of all religious buildings and sites formerly owned by the independent kingdom of Montenegro before it became part of the Serb-dominated Kingdom of Serbs, Croats and Slovenes in 1918.

The new law states that religious communities can only retain ownership of their property if they have clear evidence of ownership, triggering accusations from the Serbian Orthodox Church that the government plans to dispute its holdings.

The leading Serbian Orthodox bishop in Montenegro, Amfilohije Radovic, summoned a church council on June 15 in Podgorica to protest against what he called government interference in the church and the new law.

Serbian Orthodox Patriarch Irinej warned President Djukanovic that his actions might lead to a formal curse, or anathema, being declared.

But Djukanovic said that Montenegro is determined to establish the rule of law.

"Today is the time to realise that, if someone wears a suit or [Orthodox] vestments, they must be equally accountable to the state of Montenegro. We must send them a warning that this is the last...