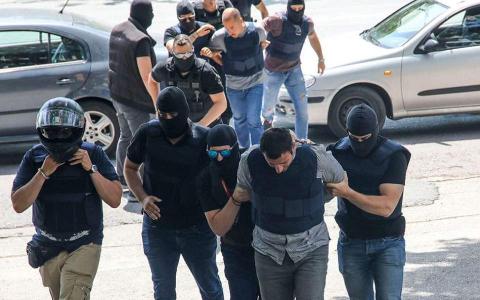 Two anarchists arrested last Wednesday following a thwarted heist on a money delivery van outside Thessaloniki's AHEPA Hospital were remanded in custody on Tuesday after defending themselves before an investigating magistrate.

Yiannis Dimitrakis, 41, and Costas Sakkas, 35, who posed as a doctor and patient for their attempted heist last week, face charges of armed robbery, forgery and civil disobedience.

Dimitrakis was to be taken to a prison in Komotini and Sakkas to the Nigrita penitentiary in Serres pending trial.

Meanwhile a 39-year-old woman charged with complicity to commit armed robbery was freed after posting bail of 3,000 euros.

According to sources, the men admitted to the attempted robbery, citing financial problems.

They denied that they had aimed to fund domestic terrorism with the loot. Police are seeking evidence of their suspected...