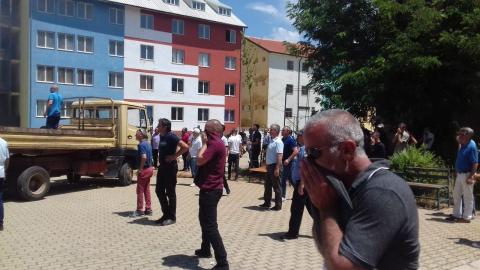 Clashes were sharpest in the town of Burrel, north of Tirana, where protesters battled police for hours over the election centre. At least two protesters were injured during the clashes. In the nearby town of Klos, police apparently did not resist attacks by protesters who threw out and burned election material.

In Kukes, police used teargas to disperse protesters who had attempted to storm the building using a truck, but later agreed with the municipality to vacate the building. Scores of opposition supporters have been arrested, including some former MPs.

Police managed to protect buildings in several other towns where protesters were fewer in number.

The Organization for Security and Co-operation in Europe, OSCE, has condemned the violence. In a press release, it said: "Not only perpetrators of violence, but also instigators, should be held legally accountable."

Albania is heading toward local elections on 30 June amid an unresolved political crisis and amid legal uncertainty.

After President Ilir Meta issued a decree that canceled the elections, urging the government and the opposition to find a compromise, Socialist Prime Minister Edi Rama insisted the elections would go ahead as planned.

The Socialist-led parliament has annulled Meta's decree cancelling the election, and has called on the public administration to consider it as "if it never occurred".

However, the electoral system in Albania is based on cross-party...