Croatia to Choose Between Nationalism, Populism and Mediocrity 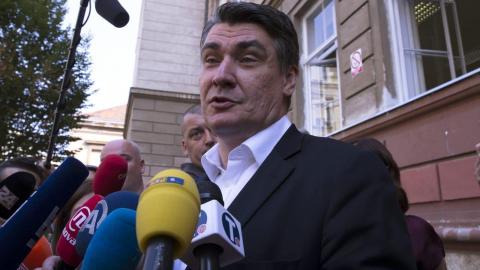 As a result of his involvement, Croatia tried to pass a law that tried to protect former Yugoslav secret service agents from extradition to Germany to stand trial. As in many other things, he was unsuccessful.

As well as in the country at large, he left chaos in the SDP, which sank to record lows - seriously trailing the centre-right Croatian Democratic Union, HDZ. Within the SDP, Milanovic favoured friends and persons who wouldn't defy him, turning away all experts, intellectuals and capable politicians from the party.

The fact that he is now looked upon as a 'hope' says more about how desperate and hopeless the Croatian political scene is, and how much voters have lost all faith in having decent politicians represent them. Milanovic is a person who can only wage meaningless and arrogant verbal battles with the likes of former HDZ president Tomislav Karamarko.

Referring to Milanovic as a leftist is the other joke of his candidacy. As prime minister, he led a government that further humiliated the country's workers, cutting their rights, leaving them at the will of their employers and making them even more easily disposable.

His government passed a highly-disputed legislation on bankruptcy that enabled indebted company owners to not repay some of their debts.

Under the mantra of austerity, his government advocated the privatisation of everything, including the healthcare system - which is now in a state of virtual collapse.

This 'leftist' also never opposed the dominant role of the Catholic Church in society. However, he did play his part in building the myth of the Croatian nationalist president of the 1990s, Franjo Tudjman. Milanovic and his government pushed for naming the new Zagreb airport after Tudjman, as well as...