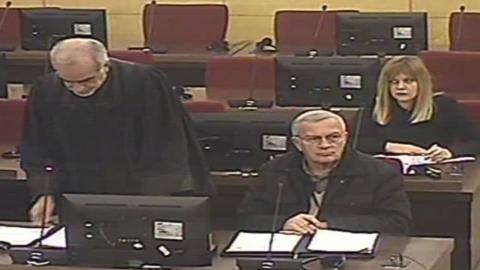 Bosko Devic's defence appealed on Friday against last year's verdict convicting him of involvement in the murders of four Bosniaks in the village of Gornji Kamicak in the Kljuc area on August 11, 1992.

The defence argued that there procedural violations during the trial, that the facts were wrongly established and that there were contradictions in the testimonies of some witnesses.

It asked for the verdict to be quashed and a new trial held.

"Your honour, this man is innocent. He was not in Gornji Kamicak on August 11, 1992 between 9pm and 9.30pm [when the crimes were committed]," said his lawyer Marinko Brkic.

Brkic explained that Devic had a solid alibi, since he was deployed with a work unit and engaged in digging holes for a power line at another location, which the lawyer said was confirmed by several sources.

However, prosecutor Olivera Djuric said that none of the witnesses who give the alibi confirmed that they saw the accused on at another place on that day.

In a statement that was read out in court by his lawyer because Devic had forgotten his glasses, the defendant said that the verdict was not just and lawful.

He said that he was not in the village of Gornji Kamicak on the evening of August 11, 1992, and that he did not detain the four civilian victims or participate in their murders.

"I never participated in a search with a unit. I did not arrest, detain, interrogate, mistreat or abuse," Devic insisted.

Meanwhile the prosecution urged the court to increase the ten-year sentence handed down to Devic.

"We believe that the punishment is too light, it should have been longer," said prosecutor Djuric.