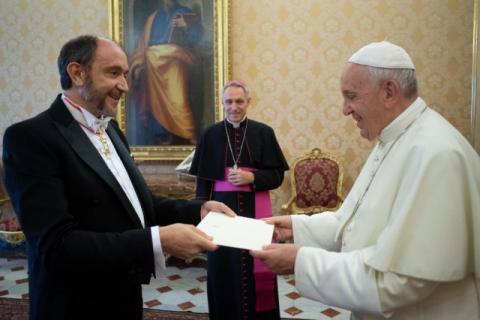 The ceremony was held at the Apostolic Palace in the Vatican, where, according to the established protocol, the Ambassador's family was also present. After the official service of the letters, the ambassador presented a phototype collection of historical documents on the relations between Bulgaria and the Holy See from the Bulgarians' conversion to the present day. Pope Francis gave the new ambassador official editions of his encyclicals and published the latest signed document in Abu Dhabi on the brotherhood between people.

After the official meeting, the ambassador spoke to Pope Francis in his private office. During his meeting, His Holiness reminded us of the recent Apostolic Journey in Bulgaria and once again gladly mentioned the children who received the First Communion in the town of Rakovski and their impression of their excellent preparation, as well as his meetings with young and old people during the public events. The Ambassador presented his greetings on behalf of the President, the Prime Minister and the Government of the Republic of Bulgaria, the Bulgarian Patriarch and the Catholic Bishops.

The new ambassador was then admitted and spoke with Secretary of State Cardinal Pietro Parolin and discussed topics of mutual interest.

Ambassador Patashev and family members in a solemn procession were accompanied by a team of the papal ceremony and escort of the Swiss Guard to the Basilica of Sts. Peter, where they entered the central entrance and visited the chapel in which the Holy Communion is exposed, the altar with the relics of St. John XXIII (Pope Roncali), and finally bowed before the central altar...

Taking a Closer Look at the Different Nursing Specialisms