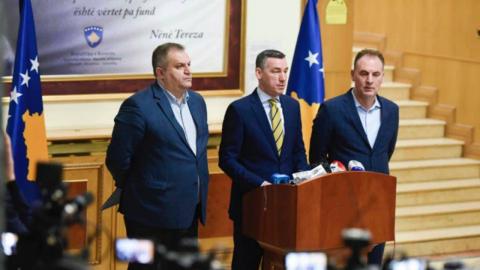 The Constitutional Court in Kosovo on Thursday has thrown the future of the national negotiating team with Serbia into question after ruling that its mandate and competences of were unconstitutional.

The ruling was a victory for a group of 32 deputies from opposition parties who sent the case to the court, claiming that the team did not represent the interests of the Kosovo people.

The court also found that the Assembly of the Republic of Kosovo is obliged to oversee the foreign policy within the constitutional competences.

Parliament had delegated the competences for negotiations in the EU-led dialogue with Serbia to the team, consisting of 11 members, with representatives from government, opposition and civil society.

However, representatives of the opposition Vetevendosje party and the Democratic League of Kosovo refused to take up their seats on the team, and instead sent the case to the Constitutional Court in March.

The EU-led dialogue process has, in fact, stalled since Kosovo Prime Minister Haradinaj imposed a 100 per cent tariff on Serbian imports in November 2018.

"The decision of the Constitutional Court is a blow to the State Delegation, and the continued existence...