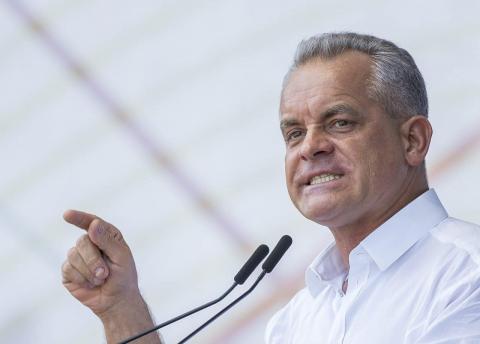 Russian prosecutors have accused the ex-leader of the former ruling party in Moldova, Vlad Plahotniuc, of drug trafficking.

The Russian Interior Ministry accused the former chief of the Democratic Party, PDM, and a former PDM deputy, Constantin Tutu, of being part of an international group that specialized in trafficking large quantities of Moroccan hashish to Russia and other nearby countries.

The prosecutors say their illicit operations started in 2012 and involved police structures from Moldova, Belarus, Spain and Russia itself.

They say Plahotniuc was part of a group of 60 people who organized the smuggling of large quantities of hashish from the North African kingdom to Russia and its surroundings via the EU.

In February 2019, the Russian Interior Ministry accused Plahotniuc and businessman Veaceslav Platon, who is now in jail in Moldova, of having created a criminal group that illegally removed over 37 billion rubles from Russia.

This followed a groundbreaking investigation by the Organised Crime and Corruption Reporting Project into an operation known as "The Russian Laundromat," which had involved removing billions of dollars out of Russia that were then laundered though a network of banks, many of them in Moldova.

Plahotniuc dismissed all the charges on Wednesday on Facebook as "fantasies".

"Russia has opened several files into my name, I do not know the exact number, I just read about each of them in the press: it was always either around an election or when Moldova, under the ruling Democratic Party, took some decisions that displeased Moscow," Plahotniuc said.

He added that Russia was trying to limit his freedom, and was putting pressure on other EU countries to issue restrictions on his movements as well...

EUROPAfest coming to Bucharest, Sibiu and Sinaia this July