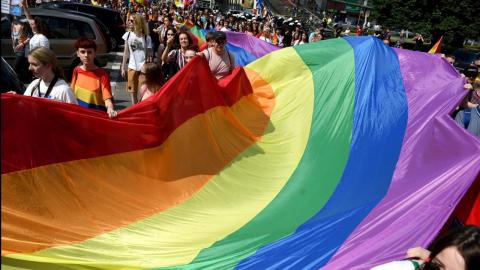 And in Hungary, Prime Minister Viktor Orban manufactures impunity for his mafia-like state by taking over the police, prosecutor's office, Constitutional Court and media while deploying a smokescreen of nationalist, anti-EU rhetoric, write commentators Balint Magyar and Balint Madlovics.

Yet even the most entrenched populists are not as unassailable as they might wish. For proof, analysts point to events in Turkey.

In a re-run of local elections that many saw as a referendum on the authoritarian populism of Turkish President Recep Tayyip Erdogan, victory for the opposition coalition proved that "he who wins by the ballot box loses by the ballot box", say academics Daron Acemoglu and James A. Robinson.

"That is where today's populist authoritarians must be defeated, and where the reconstruction of democracy can begin," they write. But it only works, they add, if opposition parties face up to the very real grievances from which the populists derive their power.

People march under rainbow flags during an Equality Parade in downtown in Warsaw in 2017. File photo: EPA/RADEK PIETRUSZKA

Poland is in the dock again for its judicial reforms as a damning report released on Friday by the Council of Europe Commissioner for Human Rights says legal...