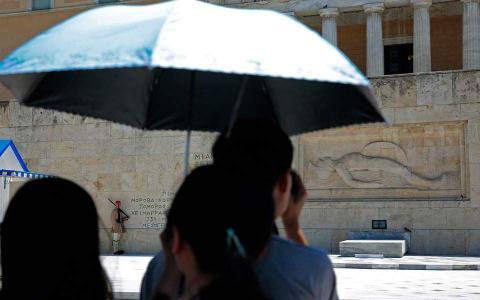 Hopes that a heat wave which baked parts of western and northern Europe last week would slip by Greece were dashed on Monday by the country's National Observatory, which warned of a blast of high temperatures on Wednesday and Thursday.

After a cool couple of days of strong northerly winds that pushed seasonally high temperatures into balmy low- to mid-30s Celsius territory over the weekend and on Monday, the observatory's Meteo weather service said hot air from Africa that has been circling Europe in recent days would start sweeping into northern and western Greece late on Tuesday, spreading east through Thursday.

For Athens, Meteo has forecast daytime highs of 35-38 degrees Celsius between Wednesday and Friday, with the worst of the heat seen in central parts of the mainland and the northern-northeastern Aegean, where temperatures will reach 41 Celsius at times.

Pandemic is boosting eurozone imbalances, ministers to mull way out