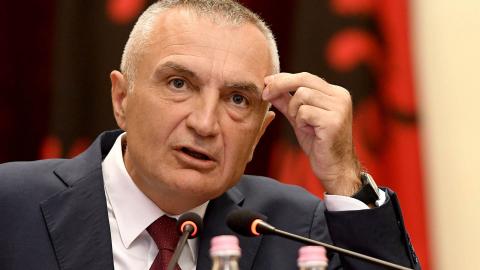 The Albanian president accused billionaire investor and philanthropist George Soros of being responsible for what he called "a conspiracy aimed at totally capturing the state".

Meta offered no evidence to support his claims, and no details about how the alleged plot was intended to unfold or how it was thwarted.

His comments came after the main opposition parties, including Meta's former party, the Socialist Movement for Integration, refused to participate in the country's local elections on Sunday.

Meta claimed that the destabilisation plot was supposed to be enacted on Sunday but failed because "Albanians didn't fall prey to the provocations".

The opposition had threatened to disrupt Sunday's polls, but did not do so.

Meta's allegations come amid heightened political tensions in Albania, where his former party, the Socialist Movement for Integration, currently led by his wife Monika Kryemadhi, has been staging protests in an attempt to oust the Socialist-led government of Prime Minister Edi Rama, which it accuses of enlisting the help of organised crime to control the country's elections.

Meta was elected president in 2017 with the support of Rama's Socialists.

But the Albanian parliament, controlled by Rama, has put Meta under investigation and is seeking to fire him from the position of president.

The opposition boycott of Sunday's polls led to a contest for mayoral and local council seats in which Rama's Socialists went almost unchallenged.

International observers from the OSCE/ODIHR monitoring mission said the near complete absence of opposition participation in the polls meant that they involved no meaningful...