Russia Still Has Cards to Play in North Macedonia 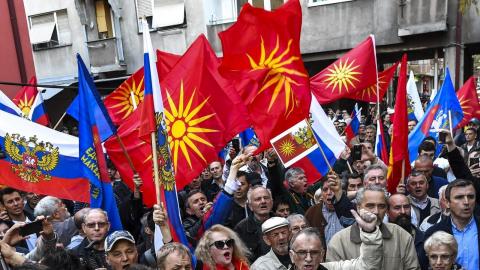 In geopolitical terms, unlike many other Balkan countries, especially Greece, Bulgaria, Serbia or Bosnia and Herzegovina, Russia did not see North Macedonia as part of its immediate strategic interests in the region.

However, as the dispute with Greece over Macedonia's name was coming to its end, reviving the Euro-Atlantic integration prospects of the soon-to-be-renamed North Macedonia, Moscow became more vocal in its opposition to the country's NATO membership.

In March 2018, the Kremlin warned the government in Skopje that its membership of NATO would have a negative impact on regional security and the bilateral relations.

Later that month, Oleg Scherbak, then Russian ambassador to North Macedonia, warned that if war broke out between Russia and NATO, North Macedonia would be a legitimate target.

Skopje did not remain silent, either. In August 2017, Defence Minister Radmila Sekerinska accused Moscow of meddling in the country's domestic affairs, while Foreign Minister Nikola Dimitrov expelled a Russian diplomat over the poisoning in Salisbury, England of Sergei Skripal.

To understand these shifts in Macedonian-Russian relations, one has to go a few years back.

After the fiasco of the 2008 NATO Summit in Bucharest, when Greece blocked the country's membership of the Atlantic alliance, North Macedonia underwent a period of significant democratic regression, which also endangered its Euro-Atlantic aspirations.

Under the populist, nationalist government of VMRO-DPMNE Prime Minister Nikola Gruevski, the country entered a phase of creeping authoritarianism with an increasingly silenced opposition and media as well as shrinking civil society. The result was widely seen as "state capture".