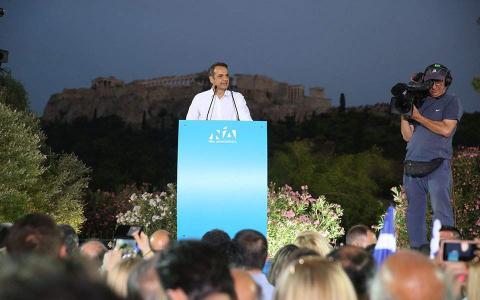 Prime Minister-elect Kyriakos Mitsotakis said New Democracy's sweeping victory in Sunday's general election had significance for Europe as well as Greece, pointing to the defeat of neo-Nazi Golden Dawn which crashed out of Parliament.
With more than 99 percent of votes counted, center-right ND had 39.8 percent of the votes, compared to 31.5 percent for Tsipras' left-wing SYRIZA party.
Caretaker Interior Minister Antonis Roupakiotis will deliver the official election results to Parliament head Nikos Voutsis at 10 a.m. (local), who will in turn present them to President Prokopis Pavlopoulos, thus completing the electoral process.
Pavlopoulos will then meet with Mitsotakis to give him the mandate to form the next government. He will be sworn in at 1 p.m. (local), at the Presidential Mansion.
"It's an important victory for Europe, not just for Greece. It looks like...