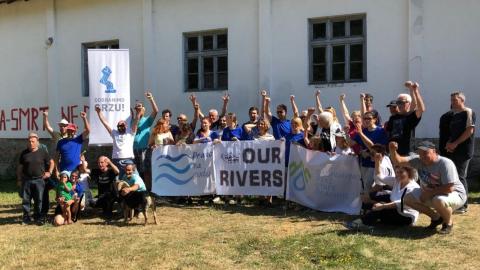 Protests have been organised in recent days by activists in Tirana, Belgrade and Podgorica against the damage done to the environment by the building of hydro-power plants.

They were staged under the umbrella name Action Weeks for Balkan Rivers, a joint project by various environmental NGOs, with the slogan "Our rivers - no damage!"

People from affected communities in Berane, Bijelo Polje, Savnik and Plav in Montenegro joined the Action Week event on Tuesday in front of the Economy Ministry in Podgorica to express resistance to the building of small hydro-power stations on their rivers.

"They made clear demands to the government and Ministry of Economy and Ministry of Sustainable Development and Tourism - a permanent moratorium on the construction of small hydro-power plants and a review of all existing contracts in regards to the existence of essential environmental impact assessments," one of the organisers, Cornelia Wieser, told BIRN.

The protesters brought drinking water from each place as a reminder to the Economy Ministry that people depend on their rivers. The protest was organised by the Montenegrin NGO Greenhom.

People from communities all over Albania - Vjosa, Shushica, Mati, Miredita, Kelmendi, Valbona and Fani - joined the Action Week protest in Tirana on Friday, protesting in front of the prime minister's office, together with local NGOs and activists, against government plans to build dams.

On Saturday and Sunday, a protest bus tour was held in Serbia as part of the Action Week, organised by the Stara Planina Action Group and Right to Water Serbia.

The tour started on the banks of Sava river in Belgrade where illegally-built cottages and houses usurp public space and endanger the city's water supply.