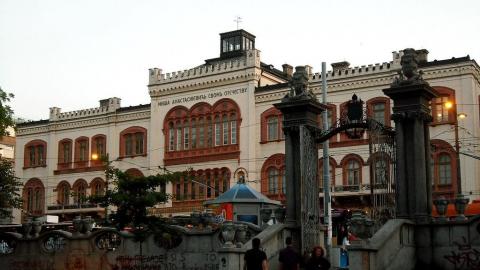 "I have learned a lot about film-making from these movies and I really wanted to come here to learn how Yugoslavia and Belgrade were like," she added

Yutong is part of a growing trend of Chinese students choosing to live and study in Serbia. While several decided to come to Belgrade, universities in Novi Sad and Nis have also been popular choices - although the numbers arriving are still small.

According to the Serbian Ministry of Education, during the current university year, there have been ten Chinese citizens studying in Serbia under a bilateral agreement and programme of educational cooperation.

Both students and experts say the reason for this influx of Chinese students could be due to the growing amount of Chinese influence in the region.

Li Xuxing is originally from the Eastern port city of Qingdao and plans to stay in Serbia indefinitely.

"I think the strengthening political ties between China and Serbia is the reason why Chinese students are coming here because, for Chinese people, we read a lot about our governmental policies on this country," said Li Xuxing, 32, originally from the north-eastern city of Qingdao.

Xuxing taught Chinese at the Confucius Institute in Nis before moving to Italy for a year. He realised he missed his friends in Serbia and decided to come back, this time to Belgrade where he plans on pursuing a PhD in Dramatic Arts, Media and Culture at the Faculty of Dramatic Arts.

"Most of them [Chinese students] are coming here because in the future, the business [between the two countries] will be growing and they will need a lot of people who can speak Serbian," he said.

Although he said learning the language was difficult and he was only able to communicate using body language at first...