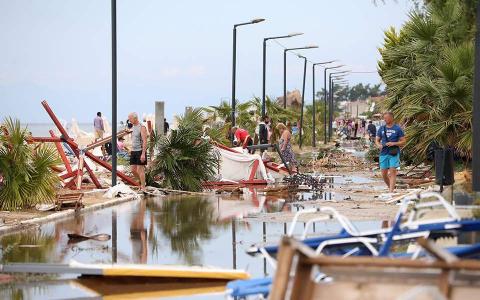 Efforts continued on Friday to restore power to all parts of Halkidiki as state officials continued their assessments of a freak storm that killed seven people and injured scores more.

The process of examining the extent of damages to cultivations, homes and businesses so that compensation can be calculated and distributed was being overseen by Interior Minister Panagiotis Theodorikakos and Agricultural Development Minister Makis Voridis.

Theodorikakos on Wednesday said that a total of 500,000 euros would be given as an emergency supplement to the municipalities of Nea Propontida, Kassandra and Sithonia so that damage to infrastructure can be repaired immediately.

The crisis was the first real test for Prime Minister Kyriakos Mitsotakis' government.

The General Secretariat for Civil Protection and regional authorities in northern Greece had been put...