PM Boyko Borissov Held a Meeting with a Delegation from China 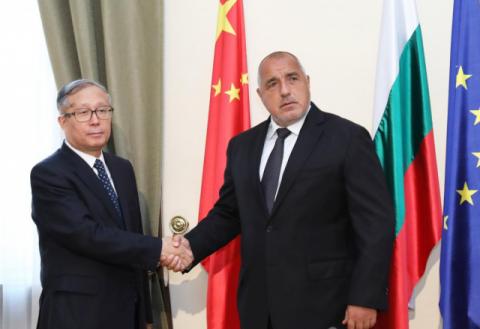 "Bulgaria highly values ​​relations with the People's Republic of China. We hope for the 70th anniversary of the establishment of our diplomatic relations this year we will achieve significant results in practical cooperation and to raise our relationship to a new, higher level. " This was stated by Prime Minister Boyko Borissov during his meeting with Mr. Li Keqiang, a member of the CCP's 19th CCP Politburo, the rank of Deputy Prime Minister of the People's Republic of China (PRC).

Keqiang is the head of a delegation visiting Bulgaria.Prime Minister Borissov welcomed the good cooperation between the two countries, both at governmental, parliamentary and regional level.

Bulgarian Prime Minister, Li Keqiang and representatives of the Chinese city of Tianjin discussed the opportunities for cooperation in areas of mutual interest between Bulgaria's and Chinese cities. "Under your leadership, Bulgaria is developing at a rapid pace," said Li Keqiang, who conveyed greetings from  PRC President Xi Jinping to Prime Minister Boyko Borissov. In the talk, Prime Minister Borissov pointed out that Bulgaria supports the "17 + 1" and "One Belt, One Road" initiatives.

"We want them to lead to practical results. This could happen by building energy and infrastructure projects with Chinese investments in Bulgaria and participating in compliance with EU principles and norms on a market principle without state guarantees," the prime minister also said. Borissov added that the appropriate forms are concessions, public-private partnership, the creation of mixed project companies.

During the meeting, the Bulgarian Prime Minister also talked about the results of the Seventh Summit "16 + 1" held in Sofia in 2018, which contributed to enriching the relations...