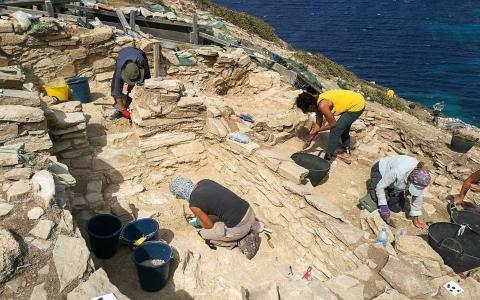 An uninhabited, seemingly drab landmass some 10 kilometers from the holiday island of Naxos in the Aegean, has yielded 4,600-year-old structures that provide evidence of ancient Greece's early history being far more complex than experts once believed.
On the islet of Daskalio, just off the coast of the uninhabited island of Keros, archaeologists have discovered the ruins of a pyramid-shaped compound - believed to be a prehistoric sanctuary - that stood shimmering atop its summit, visible to seafarers several kilometers away.
The up to 60 buildings that formed the compound were composed of more than 7,000 tons of white marble that had to be transported from the bigger island of Naxos on small wooden boats, leading researchers to believe that the area's early inhabitants carried out at least 3,500 missions to bring the materials to Daskalio.
The University of...