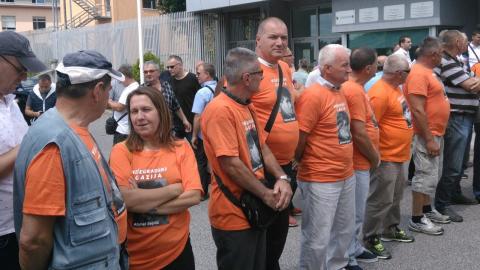 The Bosnian state court on Tuesday cleared former Bosnian Army brigade commander Ahmet Sejdic of 11 counts of inhumane treatment of Serb civilians and prisoners of war from the Bosnian Serb Army in the period between July 1992 and February 1993.

Supporters of Sejdic, wearing T-shirts with a picture of his face and the words "Visegradski gazija" ("Visegrad captain"), celebrated outside court after the verdict.

"The evidence presented was not strong enough to be to the detriment of the defendant, in other words to pronounce the defendant guilty," said presiding judge Mira Smajlovic.

Sejdic was acquitted, after a three-year trial, of the unlawful arrest of Serb civilians from the village of Bucje in the Gorazde municipality in July 1992, their forced displacement, inhumane treatment and torture, as well as the pillaging of their property.

The court accepted that civilians were tortured and inhumanely treated at Trebesko Brdo in the Gorazde municipality, but there was no evidence placing the defendant at the scene of the crime.

"The chamber has not been able to determine which people committed the acts or under whose control they were," Smajlovic said.

Sejdic was also acquitted of issuing an unlawful order to captured members of the Bosnian Serb Army to remove 24 mines with their bare hands from a tunnel in Donja Strmica in the Rudo municipality in January 1993, during which two of the captives were injured.