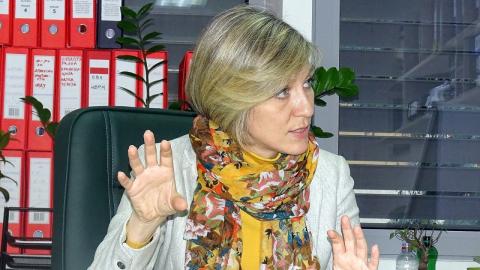 One of North Macedonia's deputy chief special prosecutors, Lence Ristoska, told an impromptu press conference on Tuesday that she and the rest of the Special Prosecution team remain dedicated to preserving the credibility and integrity of the institution's crime-busting work despite a scandal involving their boss, chief special prosecutor Katica Janeva.

"We have always acted in line with the law and have tried to be up to the task," Ristoska said, as many of her colleagues stood behind her at the Special Prosecution's headquarters in Skopje.

Ristoska did not directly answer journalists' inquiries about whether the press conference meant that the Special Prosecution team was distancing itself from Janeva.

However, she repeated on several occasions that "suspicious acts of individuals do not reflect the dealings within the entire institution" and that she and her colleagues work with a high level of professional integrity.

Janeva abruptly resigned on Monday, just hours after she was indirectly implicated in an extortion investigation.

Janeva's phone was taken shortly after she announced her resignation, as part of the investigation launched by the regular Prosecution Against Organised Crime.

The Prosecution Against Organised Crime said that the aim was to collect further evidence on two businessmen who were arrested on Monday on suspicion of extorting money.

The two businessmen are suspected of demanding millions of euros from a suspect in one Special Prosecution case, which has so far remained unnamed, in exchange for a promise of that they would help him avoid a jail sentence or get a lighter one by using their alleged influence over the prosecutor running the case.

Ristoska said that she does not know where Janeva...