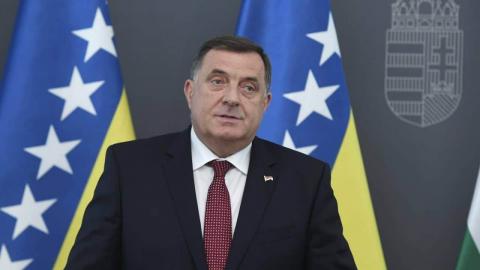 Milorad Dodik, the Serbian member of the state presidency in Bosnia and Herzegovina, has called a session of parliament in Bosnia's Serb-led entity, Republika Srpska, where he will urge MPs to block a lawsuit against Croatia over the issue of the Peljesac Bridge.

"I plan to explain to the Republika Srpska entity's National Assembly why this is not good," Dodik, the former president of the RS, told the media on Tuesday.

His move comes after a state presidency meeting on Tuesday, when Sefik Dzaferovic, the Bosniak member, and Zeljko Komsic, the Bosnian Croat member, agreed that Bosnia should file a lawsuit against Croatia concerning the bridge, which is designed to link southernmost Croatia with the rest of the country.

Bosnian officials have long opposed construction of the bridge, saying it will impede access to the country's only sea port of Neum.

But Dodik said the lawsuit with Croatia would violate "the vital national interests" of the Bosnian Serbs, which the Republika Srpska parliament had a duty to protect.

The dispute over the bridge began in 2007, when construction was first announced. Bosniak leaders insisted that the bridge cannot be built before the two countries regulate all outstanding border issues.

Despite Bosnian objections, Croatia has begun construction, partly because the Bosnian state presidency has never reached a consensus over this matter.

The former Bosnian Croat state presidency member, Dragan Covic, backed the bridge, and Bosnian Serbs have felt uninvolved in the issue until now.

"It will be interesting...