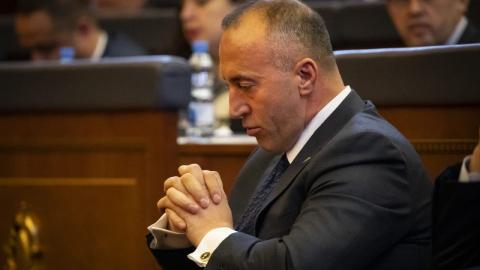 The shock resignation of Ramush Haradinaj drew sympathetic comments from senior Kosovo officials and politicians on Friday after the prime minister was summoned for questioning by the Kosovo Specialist Prosecutor's Office in The Hague, which is investigating crimes committed during and just after the Kosovo war, from 1998 to 2000.

President Hashim Thaci expressed regret that Haradinaj - a former Kosovo Liberation Army commander - and other former members of the wartime guerrilla force had been called for questioning in The Hague, but said he respected the premier's decision to quit.

Thaci also said that his own adviser, Bislim Zyrapi, had been called for questioning by the Hague prosecutors.

After informing his party about resignation, Haradinaj stopped for a coffee in a Pristina bar. Photo: BIRN

Kosovo's ambassador to Washington, Vlora Citaku, expressed outrage that Haradinaj would be questioned as a suspect.

"This is anything but justice!" Citaku wrote on Twitter.

"Twice acquitted from the Hague Tribunal, Haradinaj has been invited again by the special court as a suspect. This is persecution," she added.

Haradinaj was acquitted of wartime crimes by the International Criminal Tribunal for the Former Yugoslavia in The Hague in 2008 and in 2012.

He told his Alliance for the Future of Kosovo party on Friday evening that he would uphold his "personal honour" in the face of any accusations of wrongdoing.

"I will respond to these detractors with the honour of an Albanian warrior," Haradinaj said.

Fatmir Limaj, the head of the NISMA (Social Democratic Initiative)...