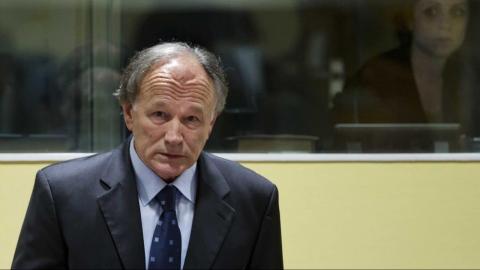 Vlastimir Djordjevic has filed a request for early release to the Mechanism for International Criminal Tribunals, citing his age, his need to be with his family and the fact that he has apologised for the crimes in which he was involved.

In the request, Djordjevic's lawyers stated that he has served 12 years in custody, which represents two-thirds of his 18-year sentence, making him eligible for consideration for early release.

"While the crimes for which Mr. Djordevic is convicted are grave, indeed, he submits that they should be counted as a neutral factor given his acknowledgement of and remorse for such," said the request, which was filed in January but only published on Friday.

Djordjevic was convicted by the International Criminal Tribunal for the Former Yugoslavia of the wartime persecution and deportation of Kosovo Albanian civilians and of assisting in the concealment of victims' corpses.

During the trial, he admitted his involvement in the attempted cover-up, which saw the bodies transported to Batajnica near Belgrade for secret burial, but denied having knowledge of the actual killings.

"Yes, I was involved when trucks with bodies were coming to Batajnica, but I didn't know when the crimes were committed," he said.

"I didn't confront those who tried to mask and hide the crimes and I didn't take any measures to find those responsible for war crimes, which I was supposed to do," he added.

His lawyers quoted some of the apologies and statements that Djordjevic gave during the trial, said that he was "sorry for all the victims" and that he would "like to see all the problems being resolved by political means, by talks, and agreements".

They also quoted his statement from his appeal hearing, at which he said...