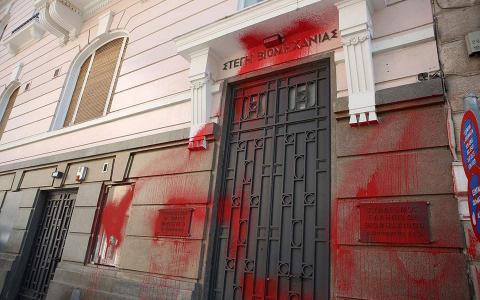 An Athens prosecutor on Tuesday brought criminal charges against a leading member of the Rouvikonas anti-establishment group.

Giorgos Kalaitzidis was charged with incitement after being arrested on Monday for threatening to expand the group's protest stunts - which usually involve throwing paint and smashing windows at targets such as foreign embassies and the offices of business associations and multinational firms - to popular tourist spots. He made the threat in a post on Facebook, following an attack by Rouvikonas on the Athens headquarters of the Hellenic Federation of Enterprises (SEV) on Sunday.

Two people were arrested over that incident and face vandalism charges for splashing paint on the facade of the building that houses the SEV offices. Kalaitzidis is also accused of being morally responsible for Sunday's attack on SEV.

Meanwhile members of the...