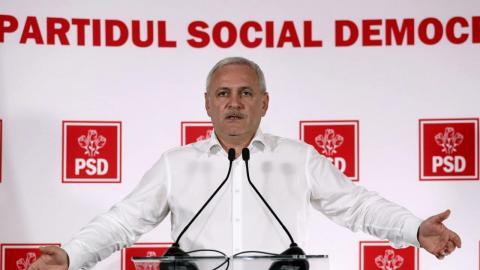 The amendments backed by the Social Democratic Party-led government included reducing jail terms and the statute of limitations for some corruption-related crimes.

The changes have been heavily criticised by the EU and opposition and civil society at home. Both Brussels and local critics have accused the government of eroding the rule of law and of reversing recent gains made in combating corruption in the country.

He was jailed on 26 May after receiving a three-and-a-half year prison sentence for hiring two people that were working for his party for jobs in the local government unit that he once headed.

Dragnea would have benefited from some of the modifications included in the criminal code reform, had it had been adopted on time.

The government has repeatedly pledged not to keep pursuing the controversial reforms since Dragnea's incarceration. Prime Minister Viorica Dancila, who was once considered Dragnea's puppet, has since tried to mend fences with Brussels, and has abandoned the government's former anti-EU discourse.

Voters showed their disapproval for the judicial reforms at the 26 May European Parliament elections, when the Social Democratic Party, PSD, got its worst-ever result and was defeated by the centre-right opposition.

That same day, more than 6 million Romanians also voted to outlaw the imposition of judicial reforms by government decree in a referendum...