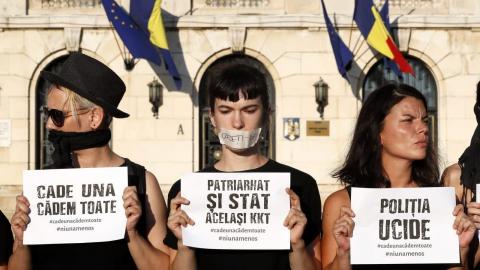 Interior Minister Nicolae Moga stepped down on Tuesday amid a storm of criticism of the slow response to the distress calls made to the police emergency number by Alexandra Macesanu, the 15-year-old who was raped and killed last week in Romania.

Moga resigned "in order to save part of the prestige of this institution that has been severely affected after the shortcomings of some of its employees", he said in a brief press conference.

The Romanian authorities came under fire last weekend after it was revealed that it took them 19 hours to locate the house from where the teenage victim made several distress calls before being killed.

Macesanu was abducted on Wednesday while hitchhiking near the city of Caracal in southern Romania.

A man who was arrested at the property from which Macesanu made the calls has confessed to her murder and that of 18-year-old Luiza Melencu, who went missing in April when she was hitchhinking in the same area.

The man, 65-year-old mechanic Gheorghe Dinca, has been accused of trafficking with minors, rape and murder.

Human remains and Macesanu's personal belongings have been found at the man's property.

Thousands have taken to the streets since last Friday to protest about government corruption and incompetence.

The protesters argue that nepotism and other illegitimate practices are widespread in Romania's public administration and are to blame for the slow reaction to Macesanu's calls.

The interior minister's resignation comes after the director of the Special Telecommunications Service, STS, stepped down on Monday.

The STS is the authority in charge of the emergency number to which Macesanu called asking for help to escape her killer.