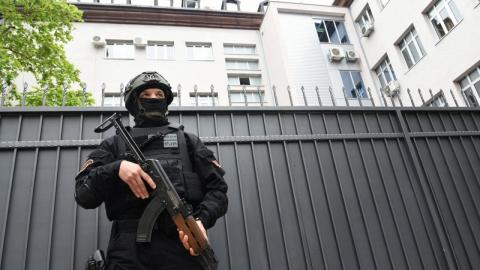 The Special Prosecutor's Office in Montenegro says it suspects British-Israeli politican consultant Aron Shaviv of helping the alleged coup attempt in October 2016, and of creating a criminal organization.

During the 2016 elections, Shaviv was head of the pro-Russian opposition Democratic Front's election campaign.

"During the investigation that was launched against Joseph Assad and eight others for creating a criminal organization and attempting terrorism, the prosecutors found evidence that Shaviv, a UK and Israeli citizen, also committed a crime. So we have ordered an extension of the investigation," Cadjenovic said on Wednesday.

Last August, the prosecution called for the arrest of former CIA officer Assad, accusing him of involvement in the allegedly Russian-backed coup attempt in 2016.

Assad was temporarily working in Montenegro as an advisor to Shaviv, then a consultant for the pro-Moscow DF.

Cadjenovic claims that between July and October 2016, 1.5 million euros were paid into Shaviv's DC LTR company account from Cyprus. The prosecution claims the money was paid by a company codenamed "S", from the Czech Republic, whose CEO and representative are Russians. "We suspect that from July to October 2016, Shaviv transferred 100,000 euros as...