No Decision Yet on Where Karadzic Will Serve Sentence 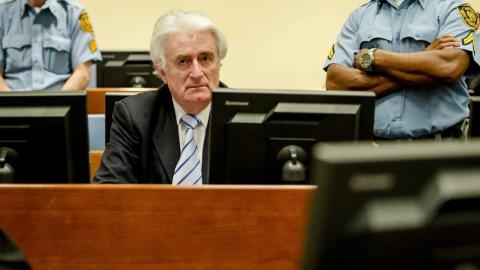 Radovan Karadzic in the courtroom in The Hague in March 2016. Photo: EPA/ROBIN VAN LONKHUIJSEN/POOL.

The UN's war crimes court has yet to decide here the former Bosnian Serb political leader Radovan Karadzic will be sent to serve his life sentence, BIRN has learned.

He will be jailed in one of the countries that has concluded agreements with the UN to enforce sentences handed down by the Hague-based tribunal, and not in any of the former Yugoslav states.

The Mechanism for International Criminal Tribunals told BIRN that its rules stipulate that a convicted person should be transferred to serve his or her sentence as soon as possible, but that there is no deadline.

"In accordance with relevant practice guidance, the president [of the Mechanism for International Criminal Tribunals] will consider a variety of information when deciding, including all relevant views expressed by the convicted person," it said in a written response to BIRN's inquiry.

Karadzic's lawyer Peter Robinson said that the defence has been given no information so far about where Karadzic will serve his sentence.

"We have had no indication of any decision on where President Karadzic would serve his sentence. We asked to be informed which countries they were addressing and that we would have some input on the process, but the Registry [of the Mechanism for International Criminal Tribunals] refused," Robinson told BIRN.

"They said once they had chosen the country and reached an agreement, they would let us know and ask for our comments at the time," he added.