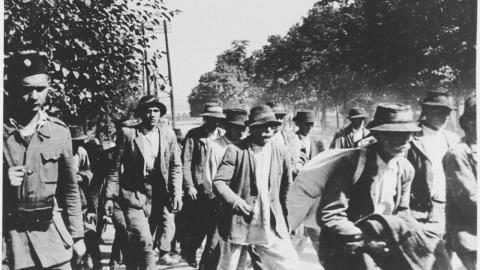 Danijel Vojak, a historian from Zagreb-based Ivo Pilar Institute of Social Sciences, is recalling how he once found an old photograph of an 11-year-old Roma boy called Stjepan Mavrovic, whose childhood was disrupted in June 1942.

Young Stjepan and his family, who lived in Stupnik in the Zagreb area, were photographed by police officers when they were detained and then sent to Jasenovac, a concentration camp run by Croatia's World War II-era Nazi allied Ustasa movement.

"All traces of him were lost [in the Jasenovac camp]," Vojak told BIRN in an interview.

Stjepan Mavrovic is not on the list of the victims of Jasenovac, but Vojak said that he has information that most of his family disappeared after being put in the camp.

"He was 11 years old, he did nothing to anyone, their property was set on fire and plundered by the peasants there, and it is very likely later that [the property] went to someone more 'eligible' and not to the Roma people," he added.

After the war, there were no longer any Roma in Stupnik, where the Mavrovic family had lived.

During World War II, Roma people were targeted by the racial laws of Nazi Germany, but also - together with other ethnic groups like Jews and Serbs, and also anti-fascists - by the fascist Ustasa movement which during the war installed the Independent State of Croatia, NDH, a Nazi puppet state.

Every August 2 since 2012, the Croatian Roma community has commemorated International Roma Genocide Remembrance Day, or the Samudaripen ("Mass killing"), with a commemoration in the village of Ustica, where the so...