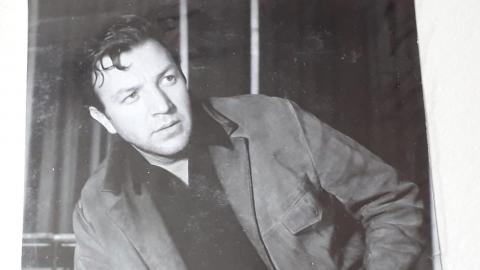 Beneath a picture of Begolli performing Macbeth, Alba spoke of the legendary Albanian actor as a gentle, sensitive father who enjoyed life to the full.

"Dad was an amazing parent with whom I had a very friendly and sincere connection," Alba said.

"He was emotional, gentle, sensitive and generous with his love. But he was also a very strong and principled personality. Besides having him as my dad, he was a friend and a brother to me, with whom I could talk openly about everything. We had an extremely frank and special rapport."

"He was very committed to his family and his career. He enjoyed in everything, even in the small things like an ordinary lunch. He always said 'You have to know how to cherish and value the small things, because the big ones come along very rarely, sometimes never.' I'm fortunate to be his daughter and my mother too was lucky to have such a spouse."

Istref Begolli, who would later wow audiences with his stage presence and charisma, was born on May 7, 1933 in Pec/Peja, western Kosovo.

Aged 15, he moved to Pristina to help establish the Provincial Theatre, where he would flourish in a string of tragic roles that took him to the most prestigious theatres of socialist Yugoslavia.

"I was around 12 years old when I started to assist him with the roles that he was preparing.

"First, my father would start learning the script and the text, familiarising himself with the words and bringing them to life. He always kept a notebook where he would write the text and also the last lines of the partner. This 'partner' was...