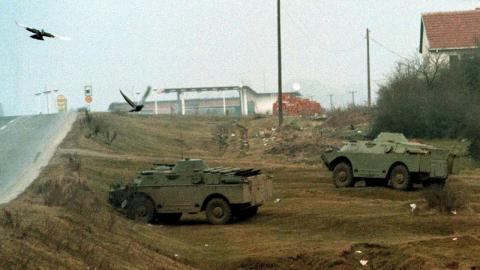 Another former member of a notorious Serbian paramilitary group has been released early from prison by a court in Belgrade having spent 12 years of a 15-year sentence for war crimes behind bars.

Miodrag Solaja fought with a unit known as the Scorpions during the 1998-99 war in Serbia's then southern province, Kosovo.

In 2008, he was convicted of participating in the killing of 14 civilians in the town of Podujevo/Podujeve on March 28, 1999, four days after the start of an 11-week NATO air war that eventually drove out forces under late Serbian strongman Slobodan Milosevic.

Already in custody for one year, Solaja was sentenced to 14 years in jail, rounded up to 15 for his conviction in another case, but Belgrade's High Court ordered his early release on July 23 in a decision confirmed by the Appeals Court on July 31.

The decision cited a report from Sremska Mitrovice prison, where Solaja served his sentence, saying he had made "maximum progress in treatment", that his "re-socialisation" was complete and that he had met the goals set in the treatment program.

The Scorpions was one of a number of paramilitary units recruited to fight alongside regular forces in the Kosovo war, in which thousands of Kosovo Albanian civilians were killed and some 800,000 expelled as Milosevic tried to crush a guerrilla insurgency.

Some of its members had fighting experience in the wars in Croatia and Bosnia. Solaja, however, was just years 20 old and had not completed his military service.

He said he wanted to "help in the fight, with comrades", as well as pick up the "paycheck".

The Scorpions arrived in Podujevo/Podujeve on March 28, 1999 to join up with the Serbian Special Anti-Terrorist Unit, SAJ.

The paramilitaries were supposed...