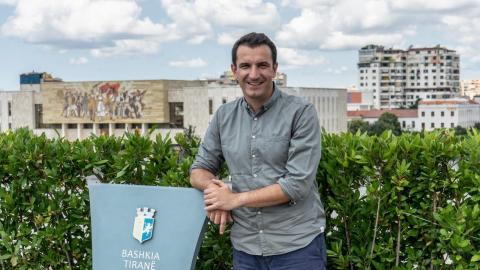 "The European narrative has been wounded," Veliaj, 39, told BIRN in an interview in July hours before he was sworn in for a second term as mayor of the Albanian capital.

"Telling Albania and other countries in the Western Balkans 'we'll consider next year, you still have some work to do' and once you fulfil that list, you see you are not being rewarded, is disappointing," he said.

"It is as if you choose to reward the best student in the class but not the one that is always on time and is always doing his homework."

Tirana as 'a piece of Europe'

While EU appetite for enlargement has declined, Veliaj's star has only risen.

From a leading figure of the MJAFT social movement in the early 2000s to policy analyst at the Berlin-based European Stability Initiative think-tank, Veliaj entered politics in 2011 with the Socialist Party of current Prime Minister Edi Rama, himself a former mayor of Tirana.

Veliaj first became mayor in July 2015 and this June he won a second term in local elections that avoided the violence that frequently marrs polls in Albania but which was boycotted by the opposition.

Veliaj said his job had altered his view of Europe as a 'destination.'

"It's about building a European culture here. My aim is to make the city a piece of Europe, where people can thrive, where people want to move to. The fact that Tirana is a dream place for many young people convinces me that we should think of Europe as destination within."

Speaking on the roof of the city hall, Veliaj pointed out the city's eclectic skyline.