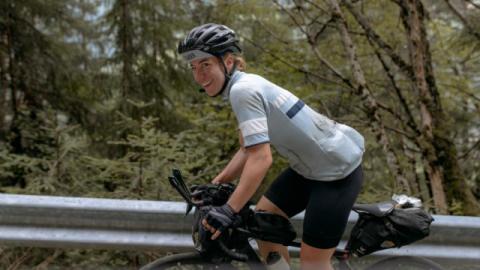 A cyclist from Germany won a 4,000-kilometre race from Bulgaria to France and became the first woman to triumph at the endurance event, reports Euronews.

Fiona Kolbinger crossed the finish line to win the seventh edition of the Transcontinental Race on Tuesday morning.

The 24-year-old slept on the side of the road and at one point was averaging just four hours sleep-a-night.

The unique race — which this year began in Burgas on Bulgaria's Black Sea coast and ended in Brest, France — sees riders choose their route and decide when to take rest. Each cyclist must pass four mandatory control points on their way to the finish.

"I am so, so, surprised to win," she said. "Even now. When I was coming into the race I thought that maybe I could go for the women's podium, but I never thought I could win the whole race… I think I could have gone harder. I could have slept less."

Each section provided a different challenge for the riders. From gravel tracks to high-altitude climbs and leg-breaking gradients. These included climbing the Timmelsjoch (2,474m) in the South Tyrol at the border of Italy and Austria, and the Col du Galibier (2,645m), one of the highest paved roads in the French Alps.

It was Kolbinger's first-ever ultra-distance race and she had nearly six hours on the nearest challenger.

Bulgaria - One of the EU Countries with the Highest Shares of Total Revenue from Environmental Tax
President Iohannis sends condolences to family of Romanian who died in the Hanau attacks, Germany