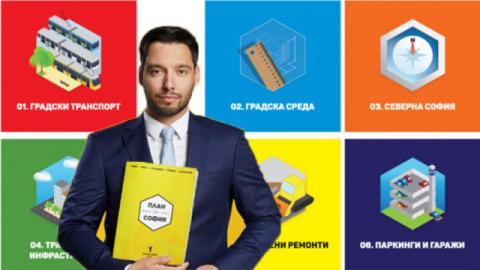 Boris Bonev is the first to announce his candidacy for mayor of Sofia in the upcoming October 27 local elections. His program for the development of the city is presented on 300 pages and is called "Plan for Sofia". He is one of the founders of the civic organization Save Sofia, which constantly offers European solutions to the problems of the capital and is the sharpest critic of expensive and poor repairs. He studied and worked in Paris, defending two Masters Degrees in Sorbonne - Economics and Management and Innovation. He was born in Sofia and lives in Lozenets.

Mr. Bonev, what is the most important problem for Sofia that needs to be addressed urgently?

- The mismanagement of the city, which I call a deadly combination of corruption and incompetence, has taken over the municipality and the political leadership. This leads to a series of problems and failures that have plagued our city in a time that is historically unique to Sofia. There is access to knowledge, access to finance and technology, but so far it has not led to a significant improvement in life in the city. Over the past 10 years, BGN 15 billion has been invested in Sofia, and if it had not been for stealing and corruption, the city would have looked quite different.

Do you have any idea where the city is going?

- For the 10 years since Save Sofia, we have always said that we do not need to invent the wheel. Thanks to the contacts that our organization has in Prague, Warsaw and Budapest, we meet there not only with similar organizations but also with the administrations and they are ready to share their experience.

The capital does not benefit from the experience of Vienna, Paris, Prague or Warsaw, although...