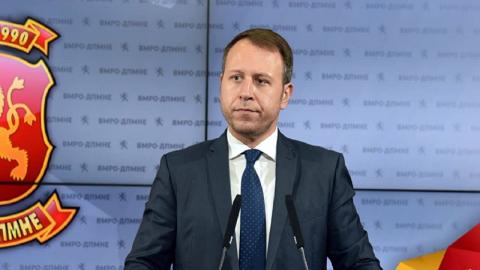 The main opposition party in North Macedonia has used publication of video footage that may further implicate the embattled head of the Special Prosecution, Katica Janeva, to demand early elections.

Igor Janusev, secretary general of the right-wing VMRO DPMNE party, said the video offered "crown evidence that Janeva was the institutional executor of the millions of euros worth extortion, and that [the two suspected extortionists] Boki 13 and Kiceec are only the tentacles of the criminal octopus of the government".

The party has long resented the existence of the Special Prosecution, formed in 2015, alleging that it mainly targeted members of the former government, which it led.

Toppled from power in 2017, its former leader, ex-prime minister Nikola Gruevski, has since fled to Hungary to avoid a jail sentence.

The party is now using publication of the video to boost its calls for early elections, insisting that this is the best way to deal with state-led corruption.

An Italian newspaper published the video on Thursday, dealing another blow to the credibility of the crime-busting institution that Janeva headed.

The video, reportedly filmed in the home of the controversial businessman Orce Kamcev, shows his suspected blackmailers, Bojan Jovanovski, aka Boki 13, and Zoran Milevski, alias Zoki Kiceec, who are both currently in detention, leaving Kamcev's home with a bag allegedly filled with a million euros.

In an audio recording, voices attributed to them can be heard promising Kamcev a lenient court decision in a case in which he is involved, citing their influence with Janeva.

In an attempt to recover the initiative, the main ruling Social Democrats, SDSM, has demanded a speeded-up investigation, led by the regular...