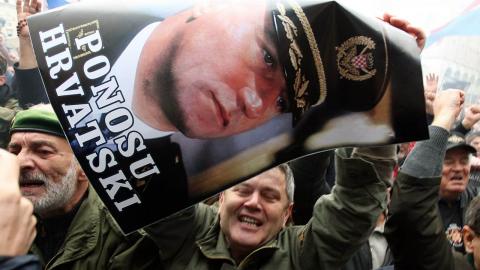 Gotovina became a national icon when he was indicted in July 2001 by the International Criminal Tribunal for the Former Yugoslavia, ICTY for large-scale crimes against Serb civilians during and after Operation Storm. A broad section of the Croatian public supported his cause, seeing him as a victim of unfair treatment of the young Croatian state by the international community.

In December 2005, while on the run from the Hague court, he was arrested in a restaurant on the Canary Islands with the help of the Croatian secret services. At the ICTY, he pleaded not guilty, along with his fellow accused, generals Mladen Markac and Ivan Cermak.

To the shock of the Croatian public, he was found guilty in April 2011 and sentenced to 24 years in prison. However, in November 2012, the ICTY appeals chamber acquitted him, and he returned to Croatia to a hero's welcome.

Directed by a legendary Croatian film-maker, 88-year-old Antun Vrdoljak, the storyline of 'The General' is based on the book 'Warrior: Adventurer and General' by journalist, writer and politician Nenad Ivankovic.

Published at the time when Gotovina was on the run, the book offered a slightly romanticised account of the Croatian officer's life and attracted controversy in 2005, when there was speculation that the Croatian intelligence agencies tracked him down using information from the book.

While the book did not include the events around his trial, Vrdoljak used a short piece of footage from the court that was shot as Gotovina was declared guilty. Meanwhile the narrator of the film - the voice that is supposed to be Gotovina's - says that he was guilty of his mother's death.

In the process, the film plays with the sense of guilt that troubles Gotovina, intending to emphasise...