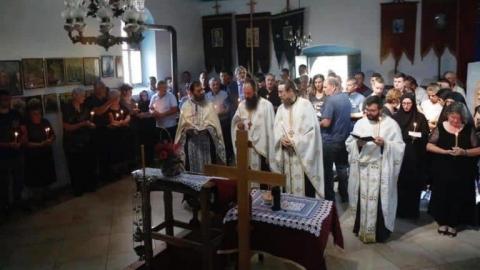 The families of two young Serbs who were killed while bathing in the Bistrica river in Gorazdevac marked the 16th anniversary of their deaths on Tuesday, but a memorial plaque that Serbian officials had announced would be installed was not unveiled.

Ivan Jovovic, 19, and Pantelija Dakic, 13, were shot dead when unknown attackers opened fire with an automatic weapon on youths who were bathing in the river.

Four more Serb youths, Bogdan Bukumiric, who was 14 at the time, Djordje Ugrenovic, 20, Marko Bogicevic, 12, and Dragana Srbljak, 13, were wounded in the attack.

Their families gathered at Gorazdevic church on Tuesday to mark the anniversary with abbots from the Serbian Orthodox monasteries of Decani and Draganac, Kossev news website reported.

Media had previously reported that the Serbian government office for Kosovo announced that one of its representatives would attend the event and that a memorial plaque would be unveiled at the spot where the attack happened.

But Milos Dimitrijevic, the senior Serb official in Gorazdevac, said that the idea of installing the plaque by the riverside was abandoned because the victims' families were against it.

"The idea came from the [Serbian government's] Office for Kosovo and Metohija," Dimitrijevic told Radio Gorazdevac.

He said that the victims' families were approached with the proposal on Sunday, but "the parents did not embrace the idea".

"We understand their pain and we did not want to put up the board against their will," he added.

Dimitrijevic did not explain why the parents were opposed to the idea.

The perpetrators of the crime were never found. The UN's Kosovo mission UNMIK unsuccessfully investigated the case and then passed on the investigation to the...

Last Despatches: Photographer Who Captured Life and Death in Sarajevo