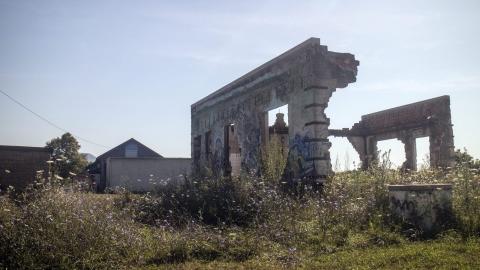 It was a long and arduous road to recovery for Pervanic, but now, in 2019, he's the founder and main driving force behind Most Mira (Bridge of Peace), an international organisation currently focused on peace-building in Bosnia and Herzegovina, specifically among young people.

Last week, Most Mira held one of its flagship events, Project on Peacebuilding, which brings a group of young people between 18 and 30 to Pervanic's home village of Kevljani, near Omarska.

The annual, week-long event sees the participants from Bosnia and abroad discuss a wide variety of challenging and complex subjects. The main goal is for them to leave with a deeper understanding of the history of the place, but also a vision of how the rifts left behind by conflict can be overcome.

The setting is key: this year's Project on Peacebuilding mostly took place in Kevljani's community centre. The building is right next to a football field where Serbs from the neighbouring village rounded up all the local Bosniak men during the war.

Pervanic remembers how a smaller group was taken to the primary school right next to the field to be tortured. "The windows were wide open, as I think they wanted us to hear the bangs and crashes and the shrieks of men."

The group of men was then taken from the school, never to return. Pervanic turns and points at a house at the other end of the road, with a flock of sheep resting lazily in the shade of a huge tree nearby. "See that white house?" he asks. "That man [who lives there] survived. No one else."

'There was no dialogue'

Kemal Pervanic, a survivor of the Omarska detention camp, walks among the graves of his fellow detainees. Photo: BIRN.

After the war, Pervanic, the author of a book...