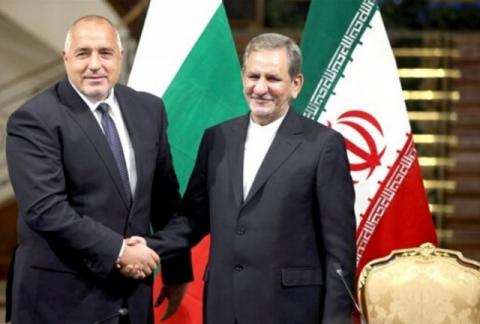 During the meeting on Monday, Jahangiri and Borissov discussed the avenues for boosting the level of economic cooperation between the two countries.

Jahangiri expressed Iran's readiness to enhance ties with Sofia in a wide range of economic fields, especially in the transportation of goods and road transit.

Borissov also said the two countries share considerable capacities in expanding their all-out cooperation, highlighting that the already good relations between Tehran and Sofia will improve in the near future.

In March, Heshmatollah Falahatpisheh, the then chairman of the Iranian Parliament's National Security and Foreign Policy Commission, and Bulgarian Parliament Deputy Speaker Veselin Mareshki, in a meeting in Tehran, called for tapping into the two countries' potentials for broader bilateral relations.

Early in February, Bulgarian President's Secretary of Foreign Affairs Dimitar Arnaudov, in a meeting with Iranian Deputy Foreign Minister for Political Affairs Seyyed Abbas Araqchi, said that the nuclear deal between Iran and the world powers is of high importance to regional and international security, and Sofia completely supports it.

Bulgarian official expressed hope that political consultations between the two countries would lead to the further development of political, economic and cultural relations.

Bulgaria attaches great importance to developing relations with a country that plays a key role in the Middle East region, he added.