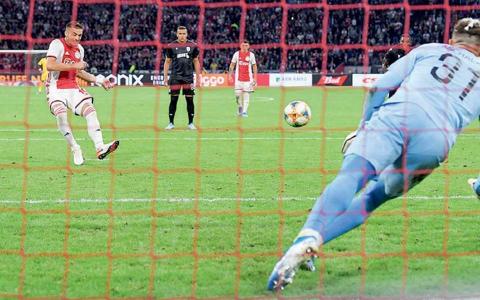 PAOK Thessaloniki was eliminated from Champions League qualifying after losing to Ajax Amsterdam in the second leg of their third qualifying round tie.
Ajax, semi-finalists last season, came from behind to beat PAOK 3-2 for a 5-4 aggregate win over the Greeks.
Ajax youth academy reject Diego Biseswar fired PAOK ahead with a thumping shot at the Johan Cruyff Arena before Dusan Tadic, having had a penalty saved, equalised with another one before halftime.
PAOK keeper Alexandros Paschalakis pulled off a string of superb saves but was undone by a Nicolas Tagliafico header and another Tadic penalty before Biseswar set up a tense finish with a stoppage-time effort.
Meanwhile Tuesday, Olympiakos Piraeus beat Istanbul Basaksehir 2-0 for a 3-0 aggregate triumph over the Turkish side. [Reuters]