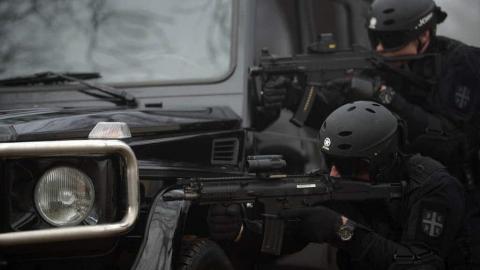 Markovic claimed that the protesters had a verbal agreement with the security unit to stick their demands on the Presidency doors, adding that the authorities broke the deal.

Vucic claimed the Kobra unit acted in line with its powers. In a series of events that followed the clash, Vucic also admitted that he does not "trust" the police with his life, despite now being the only president or prime minister in the region relying on military bodyguards - a practice that recalls the former communist regimes in Eastern Europe.

These days, although the military also guard Turkish President Recep Tayyip Erdogan and Venezuelan dictator Nicolas Maduro, as well as the Indian, Lebanese and Brazilian presidents, it is not the practice among top Western officials.

In the past, the unit secured former Serbian president Boris Tadic and former Yugoslav president Vojislav Kostunica. The only exception when it comes to handling presidential security was during the time of Tomislav Nikolic.

Interestingly, the Kobra unit did not guard Nikolic, who served as president from 2012 to 2017, even though as head of state he was also Supreme Commander of the Armed Forces.

On taking office in 2012, Nikolic said he would be guarded by those who care of the safety of all citizens, namely by police officers. By contrast, Vucic, then prime minister and Nikolic's party colleague, has decided to stick with the Cobras.

Unit should not be used to act like riot police

Member of the Unit. Photo: Official website of the Serbian Army

As Serbia's constitution and laws strictly define the roles and missions of the military and police, and separate their competencies, some experts argue that military units should never be used as de...